Wubba-Lubba Dub Dub! Rick and Morty is Back, Baby!

A Review by Zane Wetzel

Ahh, April Fool’s Day, that one day a year when most of us set aside some time in our day and try and play pranks on each other. There’s your classic pranks like “pie in the face”, “whoopee cushion”, etc., but my personal favorites are the elaborate hoaxes put up by TV and Social Media. In fact, Cartoon Network’s late night, adult orientated block, Adult Swim, has made it a point for years to pull off pranks on its audience, and this year was no exception. But this one was a very unexpected and pleasant surprise for fans: from 8 to midnight, they ran a sneak peek of the first episode of season 3 of their hit show Rick and Morty in continuous loop! WUBBA-LUBBA DUB DUB!!

For those who don’t know, Rick and Morty is an animated science fiction show about two characters of the same name who are basically like Doc and Marty from Back To The Future, only crazier. There’s Rick, the cynical genius/mad scientist that does whatever he wants and never cares about the consequences and has zero respect for authority; and there’s Morty, his socially awkward and nervous teenage grandson that gets roped into Rick’s crazy adventures. That’s all I’m going to say because it’s just too crazy to explain hereAll you need to know is that in the Season 2 finale, Rick turns himself in to the Galactic Federation run by space-bugs (who have also annexed Earth to keep Rick from running back there) to save his family from life on the run. Last we hear from them, Mr. Poopy Butthole (don’t ask) tells us to wait for a year, or a year and a half “or longer”. And we’ve been waiting for that long now, and still nothing!

Then, out of the blue, Adult Swim airs the Season 3 Premiere on April Fool’s day in place of its regular lineup, and streams it continuously online with the captions “You can stop bugging us now”. I’m cool with that. 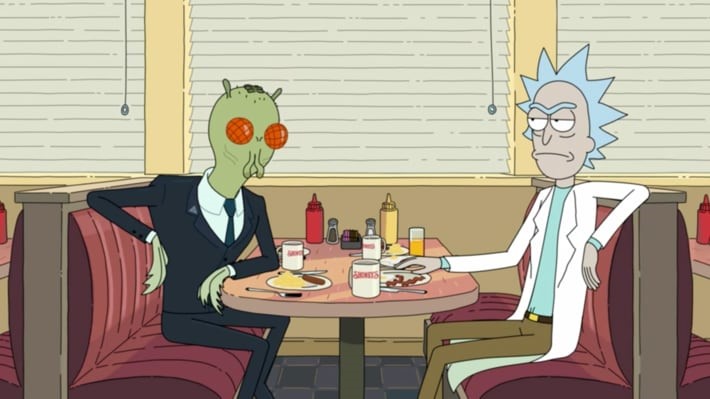 Now for the episode itself. It starts off with Rick talking with the family about how he got out of space prison at Shoney’s, but it’s quick to reveal that he’s still actually in space prison and everything we see just a construct in his mind. Long story short, the Galactic Federation (GF) sent one of their agents inside his head so they can get the secret to his interdimensional portal gun technology, and it’s going about as well as you’d expect when dealing with Rick: he’s just messing with them.

Back on Earth, we see the effects of Federation control in full bloom. There are aliens everywhere, there’s a mandatory curfew, and all the humans are paid in pills. While Jerry (Morty’s idiotic dad/Rick’s hated son-in-law) is happy with this new Earth, the rest of the family is miserable: Beth’s depressed over her dad Rick leaving them again, Morty’s given up on Rick coming back, and Summer hates having abandoned him and wants to bust him out. Summer ends up retrieving a spare copy of Rick’s Portal Gun and attempts to go rescue Rick while Morty tries to tell he doesn’t care about them and they accidentally inform the Citadel of Ricks (a secret government in charge of all the Rick’s in the multiverse, who even their Rick is against because, well, he’s Rick) of Rick’s capture. So they send their Seal Team Rick to off him before the enemy gets his secrets.

Speaking of secrets,  the bug people are still trying to get the portal tech out of Rick, and it leads to an interesting look into what may have made Rick the way he is: the Szechuan sauce that McDonald’s made to promote Disney’s Mulan (I don’t remember it, but Rick says it’s delicious. There’s actually a petition to bring it back now going online). Oh, and he met an alternate version of himself who offered to give him portal gun tech and he said no and then the other Rick blew up his wife and Beth. I’m only writing it like this because it turns out to just be a fake memory Rick made to upload a virus into their computer, hijack the agent’s body and escape. Also, when it comes to Rick Sanchez, I can never really know if Rick is actually feeling any sort of emotional reaction or not.

After jumping into several other Rick’s bodies before getting inside a member of the Council of Ricks (the leaders of the Citadel of Ricks), Rick then teleports the Citadel of Ricks into the Federation prison as payback for the other Rick’s trying to kill him, rescues Morty and Summer, and then enacts his plan to bring down the Federation. And instead of doing something big and grandiose like getting their machines to turn on them or blowing up their entire fleet, Rick opts for something more realistic, but just as big a blow. In fact, it’s so realistic that it’s actually kind of scary: he makes their currency worthless. The rest takes care of itself as the Federation descends into complete anarchy. We then switch back to Earth as chaos ensues as people start killing each other, and more importantly, all the aliens start getting out of dodge (while some of the humans living in the sewers rise up, literally, to take back Earth). We then cut to Jerry who has crawled back to his home where he and Beth comfort each other and talk about how happy they are that Rick’s gone…only for Beth to do a complete 180 when rick literally appears with Morty and Summer a second later.

Jerry, fed up with Rick after all this time, decides to put his foot down and make Beth decide for good: Rick or him. Beth chooses Rick and tells him that she and Jerry are going to spend a little time…divorced. Ooouuucccchh. So everything seems to fall into place after that: Rick’s free from prison, the Federation’s been driven off Earth along with the unwanted aliens (who Summer hears are also being drawn and quartered at the high school) and that’s that. But, surprise, Rick goes off on one of his ramblings talking about how this was his plan all along! He turned himself in so he could take down the Federation and get Jerry out of the house all because they both made him mad, and now he’s become the de facto patriarch of the Smith family. And he’s gonna go on even more adventures with Morty for 97 more years of Rick and Morty time! Nine more seasons of Rick and Morty time until he gets that Szechuan sauce, because that’s what this is all about! Also, I’m not rambling: I’m just imitating Rick’s speech, but I think you get the point. That moment right there just highlights how unpredictable Rick is capable of being: one minute he seems like he actually cares about something other than himself, and the next he claims it’s all just an act, making him extremely hard to read as a person. In the end, what does it matter, though, because Rick and Morty is back! All new episodes start airing July 2017 on Adult Swim, so this was a pretty good April Fool’s day stunt. 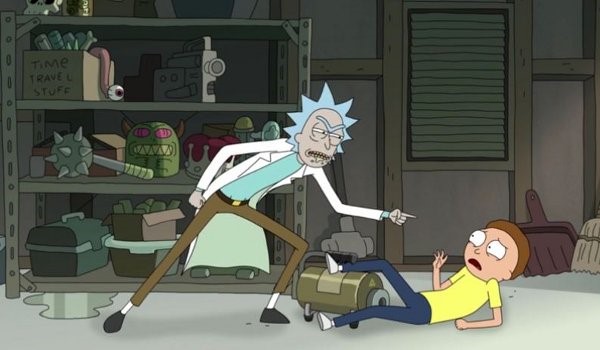 The obvious con to all of this, though, is that there were no new episodes of Dragon Ball Super or Samurai Jack this week, but considering what we got in exchange, I feel it’s a pretty fair trade. Like TOM, the host of the anime block Toonami says “April Fools giveth, April Fools taketh away”. For those who complained about it regardless, I think it’s important to point out the fact that Toonami initially got revived as an April Fool’s Day joke several years back, and they’ve been going pretty strong since then. Just something to think about while we wait another week.